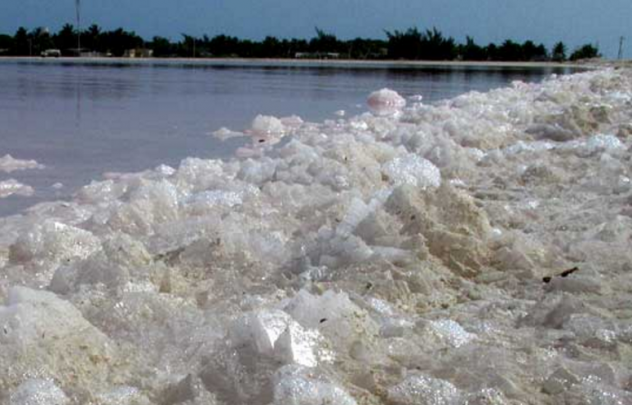 A CLOSER LOOK INTO ROCK SALT

The name “rock salt” is a common name used for Halite, a type of salt and mineral form of sodium chloride (NaCl). Halite forms isometric crystals. The mineral is typically colourless or white, but may also be light blue, dark blue, purple, pink, red, orange, yellow or grey, depending on the amount and type of impurities. This form of salt is available in most grocery stores, department stores, and hardware stores – normally sold in bulk bags for the purpose of melting ice on the roads and walkways in the winter. Aside from deicing, rock salt has many other uses, one them even being making homemade ice cream!

Where does it come from?

There are a few sources where rock salt can be retrieved. One naturally occurring way to obtain rock salt is along the shores of lakes after the water recedes due to evaporation. The water in lakes and ponds is rich in salt.

The second most common source for rock salt is found in underground deposits. These deposits are mined far beneath the earth's surface. When the salt deposits are mixed with hot water, the salt is dissolved into a brine, which then evaporates, and the result is the formation of salt crystals.

Lastly, some commercial rock salt used for the purpose of de-icing is sometimes created from evaporated salt brine – not from original natural crystals. Thus, rock salt can be formed artificially and still produce the same components of naturally formed rock salt. This process involves growing crystals from an evaporated and saturated saltwater solution.

How rock salt works to melt ice and snow

Rock salt dates back thousands of years and is still the most traditional and commonly used method to melt ice and snow. Have you ever noticed that the bulk salt used to melt ice on driveways, walkways, and roads is much stronger and effective at melting ice than your typical rock salt?

Draglam Salt offers salt that is treated. Salt is sprayed with a liquid composed of magnesium chloride. Treated salt is a product that becomes much stronger and more effective than salt on its own. This is especially useful to commercial snow removal companies that work with large areas and requires a larger supply of bulk salt. Since treated salt is more concentrated and effective, you use less salt to get the job done – specifically 20% to 30% less!

The fact that less salt is being used to do the same job reduces any potential impact on surfaces like concrete or the surrounding vegetation.

Draglam Salt is Ontario’s supplier of choice for de-icing salt delivery to major snow removal companies across Ontario. We understand how unpredictable a snowstorm can be, which is why we offer a 24-HOUR SALT HOTLINE. Contact us for deicing salt delivery in your area: 1-888-907-SALT (7258).